In 1988 I took over the management of the campus network. At the time the UK Academic community was using X.25 and the Colored-book protocols. I’m not going to go much into that history here I have provided links. There were really two parts to the network: an X.25 network based on a GEC X.25 switch running links to X.29 PADS at about 9.6Kbps and a nascent 10Mbps repeatered ethernet network running Pink Book. My predecessor had ordered some more ethernet equipment, a Seel X.25 switch, and given me a nice shiny stack of Novell NetWare 2.12a floppy disks.

After about 2 years the Network looked something like this: 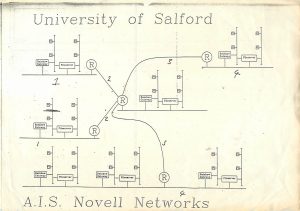 This is my original drawing done in CAD — the numbers indicate the hop-count from the original computing center building on the edge of campus.

It helped that the person who taught the computer networking class I took as an undergraduate concentrated on the ISO model, because (since this was all X.25) it fitted in with what I had learned.

You can do a lot with repeaters, Prime 9955 ethernet adapters (connected to segment #1) had terrible throughput (15PPS).

You can do a lot from low expectations: I managed to boost workstation speeds to the PADS from 2400 to 9600bps and increase the the network backbone speeds to 19,200bps in most places. This was a big deal in 1988.

Automate as much as possible:  I’m the lone network engineer, NetWare admin, and workstation administrator, if things broke I got to keep the parts.

Sharing status is important: I wrote my own X.25 network management package, in FORTRAN, running on SYSC, so the operators could tell if something had died on the X.25 network.

Novell NetWare was an awesome way to manage labs. There are subnets of ~20 PCs all remote booting and allowing students access to the mini computers on the picture. People really liked using WordPerfect and I did not need to install it individually on hundreds of PCs. The PC formed the basis of the development of the Academic Teaching Environment.